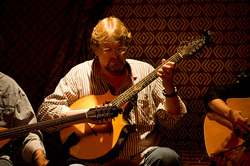 His research interests are in American and African-American Music, 20th Century Music, Irish traditional music and other folk musics and cultures, improvisation, music and politics, performance practice, and historical performance.

He is the author of Celtic Backup for All Instrumentalists, "The Celtic Guitar" (in The Cambridge Companion to the Guitar), "Miles Davis and the Semiotics of Improvised Performance" (in Improvisation: In the Course of Performance), "Trusting the Tradition: The Meaning of the Irish Session Workshop" (in Proceedings of the VIIth International Symposium on Cultural Diversity in Music Education: The Local and the Global), "Gaelic and Continental Musical Interaction in Early Modern Ireland" (in The Renaissance in Ireland), "Cinematic Constructions of Irish Musical Identity" (in Popular Culture and Postmodern Ireland), and Irish Session Tunes by Ear, and variety of other essays and book chapters.

He has published articles in College Music Symposium, New Hibernia Review, T.D.R. The Drama Review, R.P.M. (Journal of the International Association for the Study of Popular Music), Early Music America, Contemporary Music Review, Bloomington Voice, Early Music (London), Irish Music, Lubbock Magazine, Historical Performance, Piping Today, The Journal of Music in Ireland and The Tallgrass Journal, reviews in the Journal of the American Musicological Society, and chapters on music in The World and Its Peoples for Brown Reference Group and the Encyclopedia of Franco-American Relations for ABC-Clio.

He has designed and created World Wide Web content for Prentice-Hall's music history textbook series, for the Buddy Holly Center, and forwww.banjosessions.com. Current book projects include The Wandering Minstrel (the authorized biography of Irish folklorist, piper, singer, collector, and broadcaster Séamus Ennis), The Wheels of the World: American Music and Radical Politics, and a project exploring the interaction of African-American and Irish-American musical styles before the Civil War. He is also a published poet.

In addition, he records and tours internationally with Altramar medieval music ensemble (7 CDs to date on the Dorian Group label, with concerts throughout North America, Canada, Holland, Ireland, Germany, and Austria), leads the Irish traditional band Last Night's Fun (with TTU Professor Angela Mariani) and the Juke Band (pre-WWII blues and jazz), directs the Texas Tech University Celtic Ensemble, has lectured or performed at hundreds of colloquia, concerts, workshops, and pub sessions across the Continent and in Europe, and on National Public Radio, Minnesota Public Radio, and the Fox Network nationwide, and in 2005 released a solo CD of Irish traditional music, which was selected for inclusion on a compilation disc by Global Rhythm magazine's May 2006 Song Contest (distributed to over 130,000 readers). His latest disc with Last Night's Fun is Johnny Faa, a program of songs and tunes in the Irish tradition. He has written liner notes for Dorian Group, Ltd., for Naxos World, and for independent CD releases and served as columnist for www.irishmusic.com. He was the traditional-music consultant for noted composer Dan Welcher’s Minstrels of the Kells and performed at its TTU premiere, directs the annual Caprock Celtic Christmas at Texas Tech, formerly served on the International Advisory Board for the Naxos World record label and currently serves on the boards of Supporters of Fine Arts and Caprock Early Music, as co-Director of the TTU Symposium of World Musics and Southwest Early Music, as informal consultant to the Society for Ethnomusicology and to the Buddy Holly Center educational program, and on the Steering Committee of the Buddy Holly Symposium, and is a founding staff member of ZoukFest, the world's only music camp and festival for players of the Irish bouzouki. As an instrumentalist, he concretizes on Irish bouzouki, tenor banjo, button accordion, slide guitar, saz, lute, gittern, Turkish lavta, and percussion.